Given the strong uptake of 5G, the intense interest for deploying private CBRS LTE/NR in-building, and the accelerating development of the industrial IoT, we review the progress of CBRS penetration in the enterprise.

Most of the enterprise wireless network managers that I have interviewed have told me they have no idea what kinds of devices are being connected to their networks. One remarked that even the groundskeeper at the school where he works asked for permission to connect something or other to the wireless LAN.  With the proliferation of devices connecting every day to the enterprise’s wireless LAN, it is little wonder that network managers have trouble keeping up.

Wireless LAN is clearly the work horse of the enterprise network. Everyone and everything gets connectivity that is at least “good enough”. However, the sophisticated, artificial intelligence applications that enterprises are beginning to deploy will create challenges with the interference and rogue noise characteristic of wireless LANs. Furthermore, adding one more application to the LAN will degrade all of the services on the network.

One example of an intelligent application is commonly referred to as “locationing”, which measures the distance between two people or the density per square meter of a crowd of people; also, crucially, it enables the contact tracing that is used to identify which other people a sick person may have infected. As enterprise network managers grapple with health and safety compliance, an intelligent application like locationing may soon become a “must have”.

For example, managed services leader Boingo specializes in looking at the network holistically: how many things are going on?  What is the intention of the application? Boingo has developed tools that can see and categorize all of the technologies and devices transmitting on the network. What is connected, and what is signaling?  Boingo’s expertise is in large enterprises, such as airports, stadiums, and convention centers where the company deploys converged networks with a mix of cellular, Wi-Fi 6, IoT and Private Wireless Networks over CBRS. It also serves as a managed service provider for housing on military bases and in   multi-dwelling buildings (e.g., condominiums and apartment complexes).

Boingo specializes in connecting both people and things by creating intent-based networks that are optimized for application and traffic patterns. For example, it can assess whether deploying security cameras over a VLAN on the existing wireless network will enable the results that the enterprise management seeks—or whether a CBRS network is required. The Boingo spokesperson explained that before cameras can provide an extra few percentage points of accuracy, they need prediction capabilities.

Another managed service provider, RF Connect, specializes in designing and deploying wireless networks that integrate both cellular and Wi-Fi along with the backhaul. RF Connect optimizes the technology for the specific application, and the company specializes in the healthcare, transportation, and retail vertical industries. RF Connect evaluates the available spectrum and the customer’s need for secure channels and then designs an infrastructure that balances various wireless technologies, including 4G, 5G, CBRS, and wireless LAN. For example, compliance with government privacy regulations may require hospitals to deploy a secure channel that connects the equipment with the doctors; such a channel may be fulfilled with cellular. Concurrently, wireless LAN supports guest access, and LoRa may support the connection of locking mechanisms. RF Connect ensures multiple technologies co-exist and are optimized for the application.

As CBRS products proliferate, and pricing becomes affordable for a broad audience, RF Connect and Boingo can successfully deploy CBRS in applications in which wireless LAN could not exist. Open pit mining and shipping ports are examples of applications that require large coverage areas; these are environments in which moving vehicles could knock out a wireless LAN connection, and exclusion zones prevent connectivity. An outage in these workplaces translates into significant dollars lost. CBRS, and 4G with its long range and ability to hand off from small cell to small cell at 100 miles an hour, is the better solution. Manufacturing and healthcare are other areas that can benefit from CBRS applications. 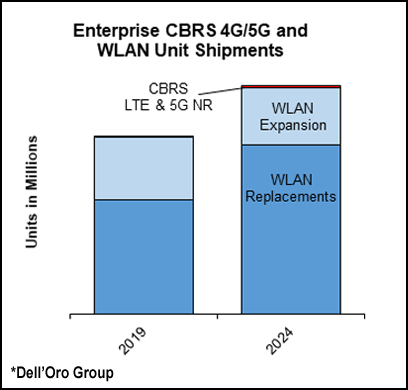 To what degree will CBRS LTE/5G cannibalize wireless LAN?

Wireless LAN has been around for over 20 years. It is a mature market, yet Dell’Oro Group estimates that over the past few years, less than 65% of the access point shipments are replacing retired units. Certainly, the “developed” regions of the world have a higher replacement portion, but not much higher than less developed regions. A “mature” market should mean that 95% of today’s access point shipments are replacements of older units; however, this is not the case for wireless LAN. What does this mean? Dell’Oro Group believes this means that wireless LAN is still evolving, changing, and serves as a platform for new development.

Approximately one-third of overall wireless LAN shipments currently are being deployed in a manner that expands the existing network; what does this mean for the next five years in this segment? Dell’Oro Group is forecasting that over 100 million access points will ship over the next five years. With the pandemic causing enterprises to pause purchases—some temporarily, while others may need several years to recover to pre-pandemic levels—fewer shipments may be deployed as expansion, and more will be deployed as replacement. Regardless, the expansion of wireless LAN networks translates into tens of millions of units over the next five years. And, there is no doubt that the Wi-Fi 6E and Wi-Fi 7 technologies will trigger further innovation, creating further expansion.