Hurricane Delta has caused some communications network impacts across southern Louisiana, with five counties reporting that at least 24% of their cell sites and down and one 911 answering point is receiving 911 calls without location information.

According to numbers from the Federal Communications Commission’s emergency infrastructure reporting as of yesterday at noon, there were 236 cell sites down across the Louisiana counties the commission was tracking, and around 30 more in three Texas counties along the LA border. 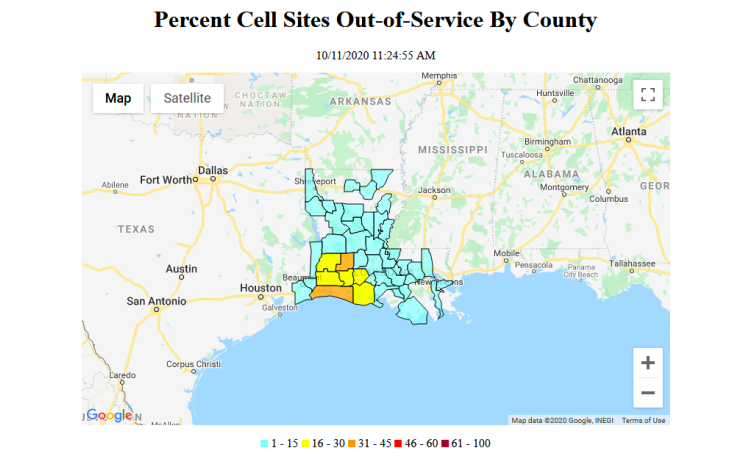 While that was only about 5.5% of the cell sites in the tracked area overall, some counties were particularly hard-hit. Cameron Parish, which is right on the Gulf, had 13 of its 29 sites knocked out, most due to either damage from the storm or loss of power. Allen Parish, LA had nearly 38% of its cell sites down (17 out of 45), Calcasieu Parish had more than 25% of its cell sites out of service.

Power and backhaul issues in a post-hurricane recovery period are often the main cause of cell sites being down, but in this case, a significant portion of the sites were also reported to be out of service due to physical damage. In Louisiana, of the 236 sites down, 80 were reported down due to damage, 125 due to lack of power and 23 because of lack of backhaul connectivity.

The FCC said that more than 207,000 cable and wireline subscribers (telephone, TV and internet services) are also out of service in the areas. One police department, in Baker, LA was re-routing its 911 calls to a different Public Safety Answering Point (PSAP) but was able to maintain location information; East Baton Rouge EMS in Louisiana was receiving 911 calls without location information.

The Louisiana Gulf region has not yet recovered from Hurricane Laura earlier this season. Even weather radar from the area was impacted; the Washington Post reported that the National Weather Service had to bring in a mobile weather radar unit to cover the area, because the permanent radar station in Lake Charles was destroyed by Hurricane Laura. (Data from the mobile radar was made available in real-time through a partnership with AT&T and The Weather Channel).

The next session in our webinar series, ... END_OF_DOCUMENT_TOKEN_TO_BE_REPLACED

The Small Cell Bill A-1116 is scheduled ... END_OF_DOCUMENT_TOKEN_TO_BE_REPLACED

The next session in our webinar series, ... END_OF_DOCUMENT_TOKEN_TO_BE_REPLACED

The Small Cell Bill A-1116 is scheduled ... END_OF_DOCUMENT_TOKEN_TO_BE_REPLACED