It’s only been a little over a year since the W-Fi Alliance released the Wi-Fi Certified 6 certification program, followed by Wi-Fi 6E not too long after, but excitement around Wi-Fi 7 is already mounting. At the Wireless Broadband Alliance’s Wireless Global Conference, Intel’s CTO of Wireless Communications Carlos Cordeiro put some of this excitement into perspective by previewing some of the most highly anticipated features of Wi-Fi 7.

First, he explained that as data continues to be moved closer and closer to users, from the cloud to the network core to the edge, it going to lead higher wireless communications demands, specifically when it comes to the emerging need of very low latency due to the advent of AI, mobile edge compute and other applications that will require it. 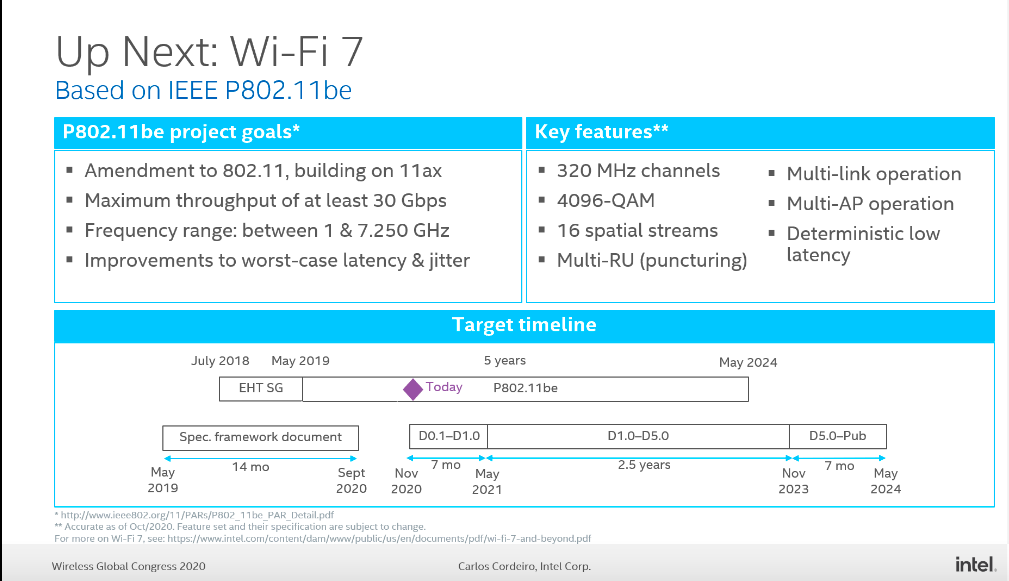 “And, so we do need, as we move forward, to continue improving the experience of Wi-Fi and that’s where Wi-Fi 7 comes,” he continued. “Wi-Fi 7 is going to continue improve on the data throughput and capacity. That is something that the Wi-Fi industry knows how to do better than anybody else.”

Wi-Fi 7 will be an extension of Wi-Fi 6 and it will support current Wi-Fi bands. One key feature that Cordeiro highlighted was deterministic low latency for applications that require a quantifiable upper bound of low latency such as industrial and enterprise applications like augmented and virtual reality and VR.

He then pointed to a theoretical data rate when comparing Wi-Fi 6 to Wi-Fi 7: “We are talking about a data rate increase of almost five times [and]if you look at the client side [there is]an order of magnitude of two times,” he said.

The second feature that Cordeiro focused on was multi-link operation, which is comparable to carrier aggregation on the cellular side of connectivity.

“If you’re familiar with carrier aggregation, you can think along those terms,” he offered, adding that multi-link operation is “a very important feature of Wi-Fi 7.”

“The idea is that Wi-Fi now supports multiple bands, [so]how can we exploit using these multiple band in a concurrent on simultaneous fashion? A client device can now be connecting on multi bands at the same time with the AP points. This gives you not only an increase in data rate, but also allows you to use these capabilities to address different use cases,” he explained.

According to Cordeiro these and other Wi-Fi 7 features are part of the industry’s goal “to make Wi-Fi address even more challenging use cases.”