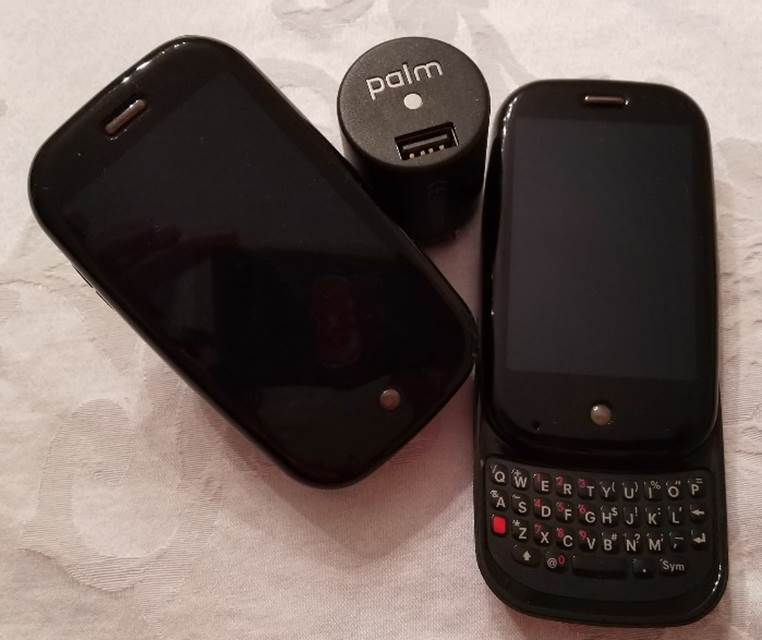 Greetings from Davidson/ Lake Norman, where it’s still sunny and warm.  October is one of our favorite times, and less travel makes the scenery even more enjoyable.

We recently used one of the “fall weather transition” days to do some sorting and uncovered one of the topics mentioned in last week’s Brief.  Pictured is our Palm Pre on its charging stand.  CNET, in their review, concluded that “Palm has developed a solid OS that not only rivals the competition but also sets a new standard in the way smartphones handle tasks and manage information.” Sprint discontinued carrying the Pre 17 months after launch.  Palm was sold to HP in 2010 and the trademark was sold in October 14 to a company related to electronics maker TCL.  WebOS now powers many LG smart TVs.

This week’s Brief will cover AT&T and Verizon earnings in light of the backdrop of previously discussed expectations.  We will summarize the key highlights of each report with a special focus on capital spending.

Our expectation is that each of the Fab 5 will have some movement this week as Microsoft (Wednesday), Amazon (Thursday), Apple (Thursday), Facebook (Thursday) and Google (Thursday) all announce earnings.  We will not lack for content, and fully expect each of these stocks to generate strong cash flows.

The Telco Top 5 started the earnings parade last week with Verizon announcing last Wednesday (10/21) and AT&T following on Thursday (10/22).  More details about those announcements are below.  Despite surprisingly strong consumer broadband net additions and low wireless churn, both VZ and T moved lower this week.  AT&T has now lost $77 billion in value (28%) in 2020, and, as we discussed last week, there seems to be no major catalyst on the horizon for the stock.

This week, Comcast and Charter will announce earnings.  Charter took a bit of a hit this week but is still up 22% ($23 billion) this year.  Given Comcast’s bullish announcement on consumer broadband net additions (see Sunday Brief here for our analysis of Brian Roberts commentary), it’s likely that Charter will post strong growth, with or without the inclusion of Keep America Connected (KAC) figures.

For those of you new to the Brief, we report backlog as a potential indicator of gross add activity.  Since AT&T is providing aggressive trade-in promotions both to existing and new customers, some of their backlog is likely attributable to their slowly upgrading base.  T-Mobile and Verizon figures are “ship by” dates, while AT&T figures are “delivery by” dates.  We will be tracking changes to these figures through early December or until there does not appear to be a backlog.

iPhone 12 Pro sales are definitely off to a strong start (the Pro Max is available for pre-order on Friday, November 6) with backlogs across all colors, sizes, and wireless carriers.  Assuming a 3-day delivery interval for AT&T, it appears that AT&T and T-Mobile are tied for the iPhone 12 Pro backlog prize, with Verizon’s backlog slightly less than their two competitors (note: we saw this same gap with Verizon last year and Big Red still posted very strong figures).  AT&T’s promotions are definitely working at the low end (128GB), likely an indicator of existing iPhone customers upgrading to the latest model.

The iPhone 12 backlog shows a fundamentally different picture, with AT&T having the longest backlog for eight of the fifteen possible storage/ color combinations (five are considered ties, and one backlog win for Verizon and T-Mobile respectively).  The notable difference for this model likely is attributable to the inclusion of existing customers in the promotion, with a possible secondary effect of some accelerated Android to Apple crossover.

Last year (when the upgrades were more modest), T-Mobile (pre-Sprint) had significant inventory issues with the iPhone 11 through mid-December (more details in last year’s post).  AT&T and Verizon’s availability depended on color.

Bottom line:  We are still very early in the cycle, but model upgrade themes are similar to last year (perhaps slightly less constrained due to 5G network availability and the pending 5G Pro line introduction) with one notable exception:  AT&T is definitely constrained at the low end (64GB and 128 GB storage models) across the board.  This will likely continue through the first weeks of November.

Verizon’s earnings:  Growth on the horizon?

Verizon reported earnings on Wednesday (link to materials here).  Here are the headlines:

“Stable” is the best verb to describe Verizon’s third quarter.  The question we continue to ask is “Where is the next $1 billion in new growth coming from?”  It appears that the company has big plans for fixed wireless as a cable replacement.  Asked about the prospects for the product, CEO Hans Vestberg indicated:

“We have said we’re going to address 30 million households over the 5 to 8 years. That’s where we — what we’re addressing. And hopefully — not hopefully, our ambition is to take a fair market share of that one as we have done with the Fios. So that’s what we’re pushing for. And our team is always geared to do better than the expectations. So of course, we are pushing them hard. And as we are releasing more and more sites and more and more homes for sale, we’re going to start reporting it.”

Assuming a $55 ARPU for High Speed Internet, Verizon sees this as a $19-20 billion addressable market.  Depending on what “fair” market share assumptions are made, the company appears to be setting an expectation for $6-9 billion of annual revenues within 5-8 years.  Given the ability to leverage common fiber infrastructure, this could be a meaningful driver of earnings in the next several years (and present a challenge to their cable MVNO partners).

Another key driver of growth comes with the expansion of Tracfone after Verizon completes their acquisition in the second half of 2021.  Here’s their latest report:

Excluding SafeLink (Lifeline) results, the “Other Brands” losses are more than offset by Straight Talk gains.  To build an incremental $1 billion in annualized revenues, Verizon would need to grow an additional 3 million net additions at a $28 ARPU.  As we discussed in a previous Brief here, leveraging and cultivating Tracfone’s brands (especially a Straight Talk Internet product) could yield enormous results.

Bottom line (from Hans Vestberg on the earnings call):  “So now it’s up to our sales team to sell. I mean it’s Ronan, it’s Tami, it’s Guru, the 3 CEOs that now needs to get out with a sales force to sell on it. Because, Kyle, which is running the technology, has bumped this network up to something that we have never seen before. So that’s how I see it. So it’s really execute right now.”  We could not have said it any better ourselves.  More proof 5G is valuable to business = higher stock price.

On Thursday, AT&T announced earnings which were remarkably downbeat except for mobility and consumer broadband (full package here).  There were some bright spots, however:

“We have an incredibly valuable customer base. It’s our most important asset for us to focus on. And when we go in and we look at the data and we understand why that base elects not to stay with us, it’s not because of customer service or it’s not because they don’t like the network. It’s because more often than not, they see some enticement to go somewhere else. And that’s usually a device offer or a belief that they can’t fine-tune their plan to meet their economic construct that they want.

And we’re now in a position where we can address that. And this offer is going to attack that very point. It’s going to ensure that our very best customers, who many have been very loyal to us, these are original iPhone subscribers that have been around a long time, are treated just like a new customer coming into our business. And that they can avail themselves of that opportunity and recommit to us for a very, very long period of time.”

It’s important to remember that to take full advantage of the AT&T aggressive trade-in promotion, customers will need to upgrade to an unlimited plan (which makes sense but has not been widely reported – full terms available on AT&T’s website) and, for new customers, that plan will need to be at least $75 ARPU (Unlimited Extra plan) prior to any discounts.

Besides DirecTV losses (down 3.3 million subscribers over the last 12 months) and HBO sluggish growth, the most remarkable trend that was not discussed on the call was AT&T’s capital conservation (vs. Verizon’s push to deploy more capital, particularly out of their local region).  Here’re AT&T’s gross capital expenditures for the last several quarters (rolling 4-qtr view added):

With or without reimbursements, the capital trend is down – at least $3.6 billion annually – at a time when more fiber investment (particularly for 5G, both in and out of their local operating territories) is needed.

Finally, there were a lot of questions about fiber deployment on the call.  John Stankey stated that his end of 2021 goal was to “exit next year in a construct where we are gaining subscribers, gaining share and growing the broadband business. And our footprint will be engineered to allow that to happen.” We look forward to seeing more clarification of the value proposition, with or without AT&T TV.

Bottom Line:  Absent a severe economic contraction, this was probably the pandemic-driven low water point for the company.  This does not mean they are out of the woods yet, and increasing the dividend (even fractionally) while pushing the brakes on capital spending seems to us a surefire way to suboptimize shareholder returns.  Either AT&T believes in fiber (at the expense of dividend increases) or it doesn’t (which contradicts John Stankey’s comments).  And they have, especially out of region, some catching up to do.

There’s more we could say, but will leave additional commentary to comparisons against Comcast and Spectrum in next week’s Brief.  Until then, if you have friends who would like to be on the email distribution, please have them send an email to sundaybrief@gmail.com and we will include them on the list (or they can sign up directly through the new website).