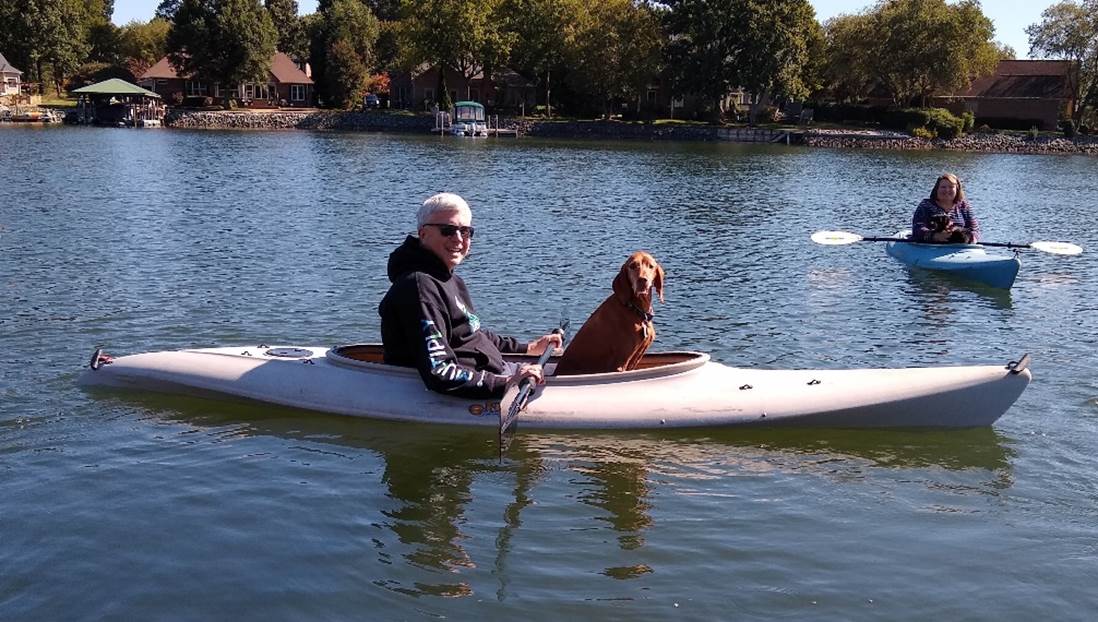 October greetings from Virginia Beach and Davidson/ Lake Norman.  Fall has arrived in the Piedmont, but that has not kept us (and pets) from enjoying our kayaks.  Hopefully you are finding time to enjoy the outdoors.

Many thanks to Jennifer Fritzsche for her terrific column last week on the state of fiber.  With a few exceptions (outlined in Sunday Briefs here and here), increased fiber deployments have benefitted shareholders and customers alike.  Her column was a terrific chronicle of several service providers’ intentions and activities.

This week’s Sunday Brief will return to our focus on 3Q earnings.  After covering the state of home broadband deployments two weeks ago, this week we will cover the impact of self-install, the temporary upside of increased political advertising, and what’s going on with non-traditional wireless companies after the CBRS auctions have concluded.

What a difference a few weeks makes to Fab 5 valuations.  With the exception of Alphabet (Google -$1B lost), each of the Fab 5 enjoyed significant gains over the previous two-week period.  Apple (+$108B), Amazon (+$87B), Microsoft (+$44B), and Facebook (+$15B) all returned to August 11th or 12th stock price levels.  The Fab 5 continue to be on track to add $2-2.5 trillion in market capitalization this year, or basically 2-2.5x the entire market cap of the Telco Top 5.  Three of the Fab 5 have equity market values exceeding $1.5 trillion, while Alphabet is within a few billion of exceeding the $1 trillion mark.  Regulatory/ anti-trust uncertainties aside (this likely explains the difference between Alphabet’s and Facebook’s performance), the pandemic has made the prospects for the Fab 5 stronger.

The Telco Top 5 also managed to tread water over the last four weeks (-$5B) with continued gains continuing to be seen at Comcast (the Trian Capital Management investment announcement came shortly after the September 20 Brief) and T-Mobile.  The valuation “see saw” of T-Mobile’s and Charter’s gains (+$72B) offsetting AT&T’s substantial 2020 losses (now -$70B) still holds, and T-Mobile’s market capitalization is within $62 billion of Ma Bell.

Of special note, T-Mobile tapped the debt markets last week (announcement here), this time for $4 billion in financing at an average rate just north of 3.0%.  After 3Q earnings are complete, we would not be surprised to see the average cost of debt for T-Mobile within 150 basis points of AT&T.

In another very interesting development, Amazon announced palm scanning (more on this insightful article from The Verge here who correctly identifies Amazon One as an identity innovation that enables easier payments).  The days of corporate key cards are over if this technology is widely adopted.

On the heels of our discussion of Fab 5 acquisitions in the last several Briefs, Microsoft announced that they would be spending $7.5 billion (all cash) to acquire ZeniMax Media and Bethesda Softworks, creator of The Elder Scrolls and Fallout video game series (announcement here).  Great news for the 15+ million Xbox Game Pass subscribers – not so great news for Sony.

Apple CEO Tim Cook also received his first major equity grant since 2011 (see announcement and analysis from CNBC here).  As the article states, if performance objectives are met consistently for each year of the agreement, Cook could receive as many as 1.002 million shares by 2025.  For a company that has created more than $1.24 trillion of value in the last 21 months, granting 0.1% of that gain to the CEO seems like a reasonable leadership payday.

Finally, ICMYI, Dish (not one of the Top 5 as measured by equity market capitalization but definitely a Top 5 creator of news) founder Charlie Ergen formed a blank-check Special Purpose Access Company (SPAC) in late August (filing here).  CONX, as the entity is known, seeks to raise $1 billion “to effect a merger, capital stock exchange, asset acquisition, stock purchase, reorganization or similar business combination with one or more businesses or assets.”  Several of you reached out looking for more insights on the SPAC.  We think there could be many, but don’t think that this is a) a vehicle for a satellite merger between Dish and DirecTV, and b) a means to separate wireless and satellite assets (at least at a $1 billion valuation).  There will be more insights on this after Dish’s earnings call; identifying what it likely doesn’t represent is as important as precisely targeting its purpose.

We are continuing our exploration of key 3Q earnings drivers in this Brief.  As a review, here are the top items that we introduced two weeks ago:

We are continuing our exploration of key 3Q earnings drivers in this Brief.  As a review, here are the top items that we introduced two weeks ago:

In Part 1 (here), we covered the importance of home connectivity and the incremental revenue opportunity that should show up in cable and, to a lesser extent, Verizon/ AT&T results this month.  One of you (an industry veteran) made an extremely astute comment which can be summed up as follows:

“At [telco], we had the 20/80 rule.  Just get the 20% of customers that will deliver 80% of the bundled value.  This worked in the short term, but, as the definition of value changes to [Work From Home], streaming, and other pull-through services, especially in this [COVID-19] environment, our past concentrated focus leaves us in catch-up mode.”

We had not thought through the implications of past concentrated decisions as much as this individual has, but it’s a very telling statement.

Self-Install:  Here to Stay.  Before going into a chronicle of statements related to CBRS, let’s touch base on one sustaining and another periodic benefit to 3Q earnings.  Self-installation of residential broadband services peaked at about 90% of total installations during the heart of the pandemic (using Charter CFO Chris Winfrey’s Q1 comments here as a marker).

Assuming that the “new normal” for self-installations is between 70-80% for new residential customers, the math plays out as follows (per install):

As Comcast and Charter have indicated, however, self-install adoption was already well underway, particularly for High Speed Internet customers (and, within that subset, for smaller household footprints like apartments and condominiums).  This savings applied to a subset of customers, likely 25-30% of gross residential installations.  With Comcast and Charter combining for ~2.6 million new High Speed Internet installations in 2Q, the incremental benefit to the two companies would have been ~$33-47 million in 2Q and likely will see another incremental $30-40 million benefit in 3Q.

This is a relatively small number compared to their total expenses and the potential for 3Q bandwidth upgrades (the annual impact of 150,000 1 Gbps upgrades is likely more than the range above).  But it presages another important development discussed by Brian Roberts during his Communicopia interview:

“I think about maybe what might be next, and we’re early days, but we’re looking at smart TVs on a global basis. And we’re wondering, can we bring our same tech stack or certain capabilities in aggregation to consumers who are relying more and more on smart TVs. We’ve done that with X1 when we syndicated it to Canada and to other operators in the United States. And we see a similar road map possibly for that.”

Self-configuring TVs (cable services on demand, Comcast Flex turbocharged, both?).  Self-configuring modems (perhaps embedded within existing Wi-Fi access points)?  These are two of the last remaining cost sources driving installation costs.  When these are removed, the model changes (and, with X1 embedded in many/ most smart TVs within a few years, so does the leverage Comcast has over their cable partners).

Political Spending:  Masking 2021 Weakness.  No doubt that the advertising climate was bad in 2Q.  No sports (in Comcast’s case, no Olympics) and no new content.

All of that changed in 3Q with baseball and football returning.  And then, the mother of all ad fillers – political advertising.  $9.8 billion was spent across all media channels in 2016 according to AdAge, with traditional broadcasters losing out to cable and social media channels.

This week, the Center for Responsive Politics, a non-partisan watchdog organization, projected that $10.8 billion will be spent across the same channels in 2020, and fully admits in their news release that this number could be low because of the substantial amounts that have been raised because of the Supreme Court vacancy confirmation process scheduled to occur in October (CRP counts all federal monies raised and may not include monies contributed by self-funding candidates).  Full release here.

Regardless of the exact figure, the benefit to cable, and to a lesser extent, AT&T will be significant.  Here are the key battleground states and their local cable/ internet providers:

Cable as a medium is diminished because of increased streaming competition, but there are plenty of scatter (advertising) slots to be filled, and many tight races to fill them with.  Every advertising seller loves multiple tight races, and there seem to be an abundance of them this year.   The impact to cable (vs. 2016) is likely in the billions.

More sports, more politics, more new content.  Expect these to be important themes not only for 3Q but for October 2020.  Holiday advertising is an entirely different story (particularly in ad-rich markets like New York City), but at least there’s some offset thanks to an active political season.  For a slightly dated but likely proportionally correct (presidential, governor, senate race breakdowns) assessment of the rate, this report from Advertising Analytics, Cross Screen Media, and Politico is a useful primer.

More companies will be discussing wireless network deployments than ever before.

With the Citizens Band Radio Spectrum (CBRS) auction quiet period over, many companies are not waiting to discuss their deployment plans and qualifications.  Here are a sampling of the news reports:

The important thread here is that each of these companies has not had to manage this much RF in some time (if ever).  They now have the opportunity to increase their addressable market through wireless High Speed Internet deployments (faster than satellite – even Starlink) and possibly use CBRS as a business failover circuit (diverse path).  We will be listening for a quick deployment schedule that treats CBRS as a transformational event vs. another network deployment project.

We could write a lot more, but that’s it for this week’s Brief.  Next week we will closely examine the sources of AT&T’s recent underperformance and gauge if their recovery process can occur in quarters or years.  We will also take up the topic of store/ channel distribution changes in the communications world following COVID-19.  Until then, if you have friends who would like to be on the email distribution, please have them send an email to sundaybrief@gmail.com and we will include them on the list (or they can sign up directly through the new website).

Stay safe, keep your social distance, and Go Chiefs (whenever they may play)!