US Army signs up 72 bases for FirstNet

The U.S. Army’s public safety personnel will use AT&T-FirstNet services at 72 bases around the lower 48 states, plus Alaska, Hawaii and Puerto Rico.

AT&T-FirstNet said it will be delivering delivering nearly 3,200 FirstNet service lines for the Army’s firefighters, military police and security personnel, along with more than 3,000 FirstNet-capable devices and more than 700 signal boosters to improve indoor connectivity. AT&T-FirstNet is also prepping the devices for use, including preloading multiple apps from the FirstNet store on the devices, the carrier added.

The Army will also have access to the FirstNet fleet of nearly 80 deployables, both vehicles and aircrafts, that are available to its users at no additional charge to assist in coverage for emergency response, or bolstering coverage and capacity for planned events.

The decision to sign on for large-scale AT&T-FirstNet services comes after a pilot program held this spring at Military Ocean Terminal Sunny Point in North Carolina, where the Army tested FirstNet use for its fire and military police under storm conditions. AT&T-FirstNet said that the pilot also “allowed the Army to see the benefits of in-building signal boosters as well as FirstNet’s ease of use, resilience and the breadth of capabilities that could be available to each Army installation regardless of size or location.”

The Army also used FirstNet-capable routers to help with operations in the aftermath of Hurricane Laura striking Fort Polk in Louisiana. Those routers, the carrier said, were installed in camera-equipped vehicles that “provided Army operations and planners with near real time delivery of video despite the extreme weather conditions.”

“FirstNet is helping us improve vital communications on our installations, depots and arsenals, including during catastrophic disasters or emergencies when communications capabilities are strained,” said Colonel Kevin Comfort, who is Command Provost Marshal at headquarters for the Installation Management Command located in Joint Base San Antonio at Fort Sam Houston in Texas. “We’re adopting FirstNet because it is designed for public safety professionals with priority, preemption and highly reliable data communications that will improve our overall response and our interoperability with our civilian partners.”

The Army’s interest in FirstNet comes as the Department of Defense is more broadly looking at modernizing its use of telecom services and exploring how it will use 5G — including potentially operating its own 5G networks. AT&T also recently won a contract to provide 5G and networking services at multiple Air Force bases, while Verizon has been building its own roster of military sites where it is providing 5G, including Marines bases.

In related news, FirstNet has been detailing AT&T’s recent coverage expansions in a number of states, including new purpose-built FirstNet sites and other network enhancements in South Carolina, North Dakota; Waldorf, Maryland; Cecil County, Maryland; eleven counties in Georgia, and in Maine, where the carrier said it built both FirstNet sites and updated 150 recently acquired sites with additional LTE spectrum activation, including Band 14 coverage. In Mississippi, AT&T-FirstNet touted new sites as well as the addition of Band 14 coverage to more than 400 sites across the state. 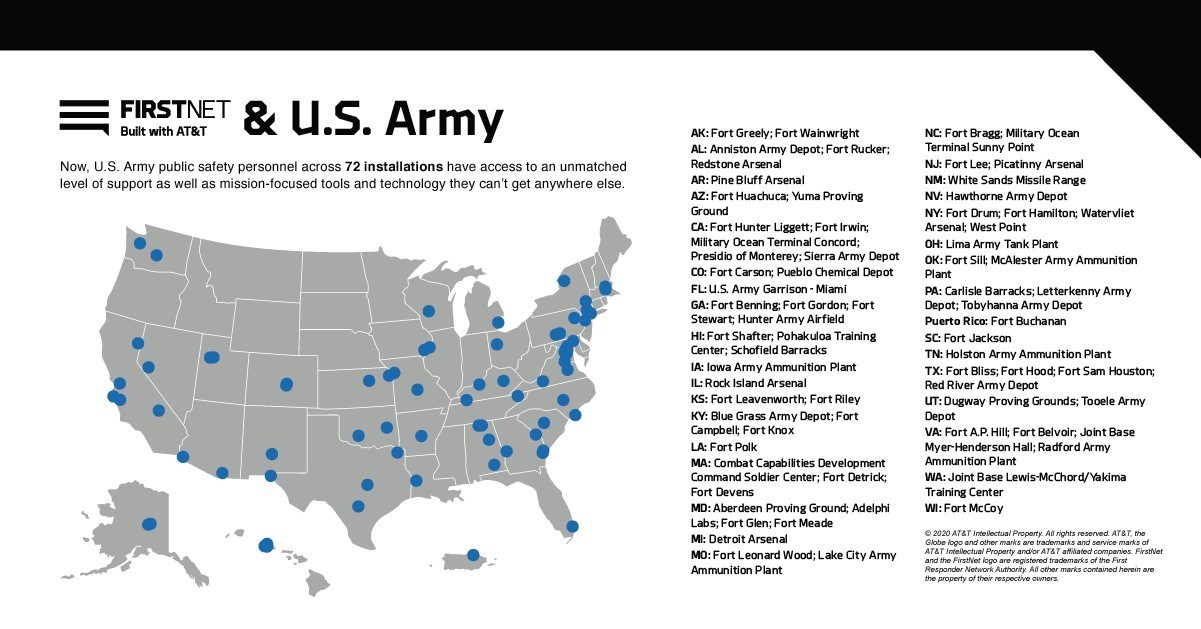 The post US Army signs up 72 bases for FirstNet appeared first on RCR Wireless News.

The next session in our webinar series, ... END_OF_DOCUMENT_TOKEN_TO_BE_REPLACED

The second session of our joint virtual ... END_OF_DOCUMENT_TOKEN_TO_BE_REPLACED

Robert E. Post, also known to many as ... END_OF_DOCUMENT_TOKEN_TO_BE_REPLACED