US networks bear up well under usage shifts, umlaut finds

U.S. wireline networks held up well overall under the network usage shifts associated with the coronavirus pandemic, according to new data from benchmarking and analysis company umlaut provided exclusively to RCR Wireless News. The one exception seems to be related to ultra-high-definition streaming, which requires relatively high bandwidth in the downlink.

Umlaut examined crowdsourced data related to whether wired networks were able to handle the applications commonly used for at-home work, both on a national basis as well as in the top five U.S. metropolitan areas: Standard definition video chat, high definition video chat and high-quality high definition (HQHD) video chat, plus YouTube UHD transmission. The analysis is based on at least 230 million data samples taken before and during the U.S. lockdown period, as well as around 200 million data samples from the peak lockdown period.

“Overall, the results of our crowd-based evaluation of fixed lines in the U.S. are encouraging,” said Hakan Ekmen, CEO of umlaut Telecommunication. “By far more than 90 percent of the lines in the U.S. easily meet the challenges of working from home. We only see restrictions when video platforms with UHD streaming are used in addition to video conferencing.”

The vast majority of wireline networks across the country were able to meet the requirements for standard-definition video chat, according to umlaut’s data. However, as downlink requirements rose — and particularly when they rise past the 3 Mbps downlink point — it became more difficult for networks to meet the needs of the application.

The Federal Communications Commission currently defines minimum “broadband” network speeds to be 25 Mbps uplink and 3 Mbps in the downlink.

Umlaut’s data also offers some insights into the nature of the wireline urban/rural digital divide during the coronavirus lockdown period. Both urban and rural networks offered about the same level of support for standard-definition video chat. But the higher the downlink requirement, the more likely that rural networks would falter — particularly for YouTube HD use, which demands 15 Mbps in the downlink. While more than 73% of urban wireline networks could handle that requirement at the peak of the lockdown period, only about 67% of rural networks could. 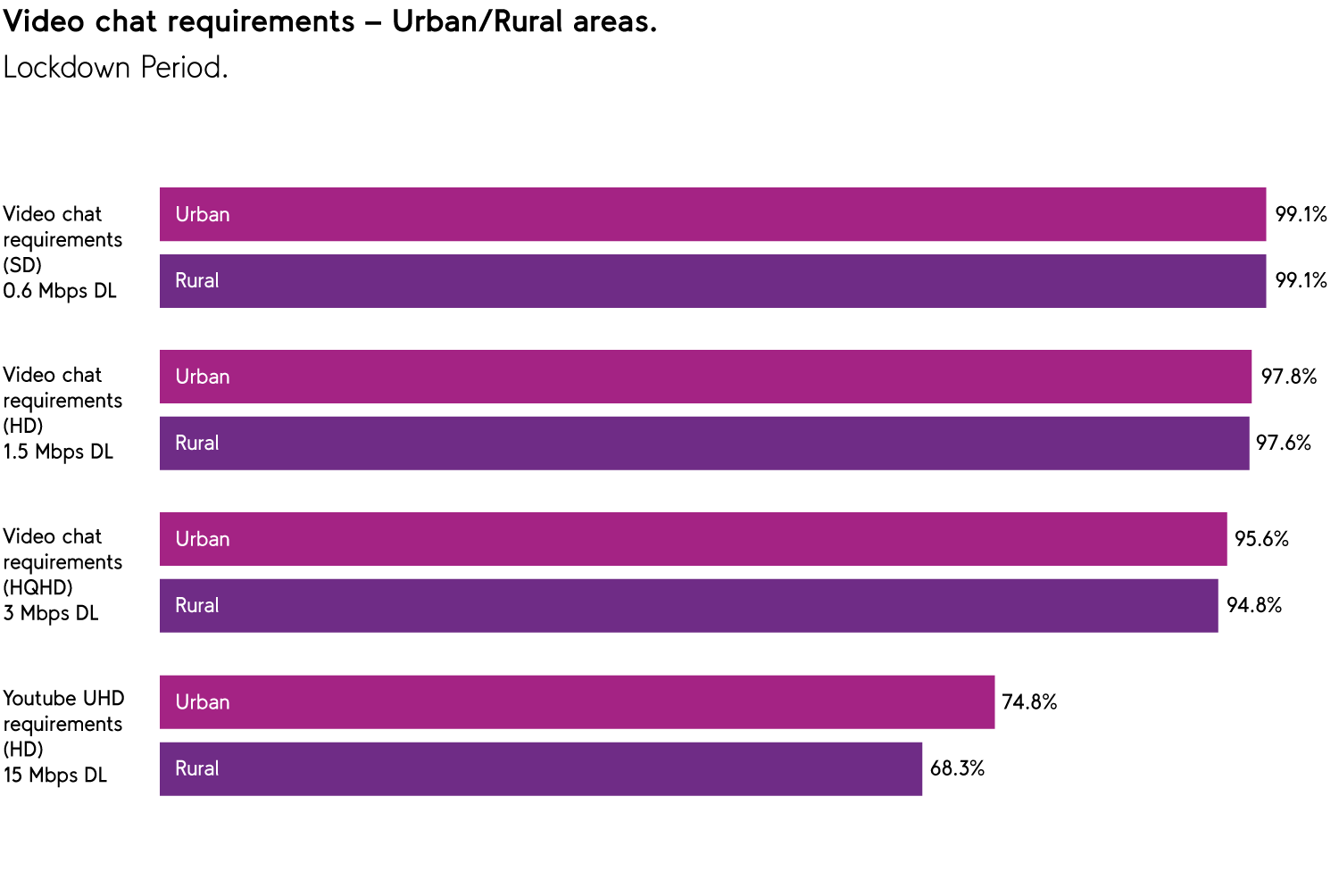 Comparatively, networks in different urban areas tended to have very similar levels of performance even at the peak of the lockdown period. While UHD video was a relative challenge, HQHD video chat capability was at least 94% across urban networks.

In network snapshots over time, umlaut’s data showed that network capability largely held steady from the pre-lockdown period, through the lockdown period and at the period’s peak.

Even at the peak of the lockdown period, there was a slight overall drop in networks’ ability to meet the needs of higher-definition video chat, but it was only a small drop in most states.

Comparatively, similar analysis by umlaut of wired connections in the U.K., conducted between March and May of this year, found that one in 10 wireline connections had limitations in meeting the needs of HQHD video chat, but between 54-58% of customer lines would struggle with YouTube UHD.

The next session in our webinar series, ... END_OF_DOCUMENT_TOKEN_TO_BE_REPLACED

The next session in our webinar series, ... END_OF_DOCUMENT_TOKEN_TO_BE_REPLACED